Each year, during the last days of October, on a tiny Island just off the Eastern Australian coast, thousands of yellow flowers bloom. They arrive just in time for my family as we celebrate el Día de Los Muertos, Day of the Dead, a legacy of another life we lived in Southern Mexico. 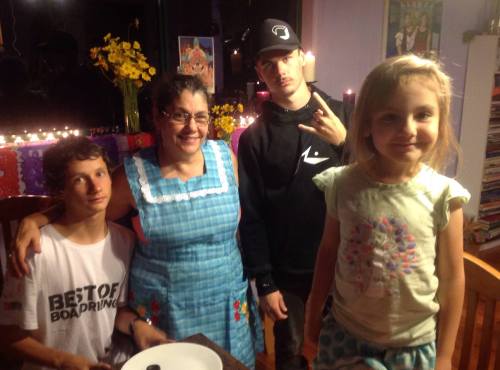 Ever since my compadres showed us how to celebrate Day of the Dead in Mexico, our family has carried on this tradition even years after our return to Australia

Far removed from the borrowed commercialism of Halloween, this is a rite we have observed since it was taught to us by our Mexican compadres. From a family of traditional Yucatec Maya, they celebrated it with us as Hanal Pixán, literally “The Food of the Souls”.

Now it has become something of our own, something unique.

So how has this happened? What is our deep connection to an ancient tradition rooted in both pre-hispanic and post-conquest culture? The story began for us when we left Australia and took our three young sons to live and work in Southern Mexico on the Caribbean coast of the Yucatan Peninsular. We settled in a small, tranquil fishing village sitting on an impossibly beautiful lagoon protected by the second largest coral reef in the world.

Not wanting the sheltered, segregated lives of so many extranjeros, foreigners, we quickly enrolled the boys at the local Escuela Primaria with the children of the local fishing and diving families. Nobody spoke English, some spoke Maya as well as Spanish. We struck up a friendship with one of the young school teachers, Maestro José Emeterio and his wife, Annel Lucia as they took us through the basics of the Spanish language and culture.

The youngest of our three boys (centre), proudly marches in the desfilar, for El Día de la Independencia Mexicana.

José grew up in a tiny village on the gulf side of the Yucatan peninsular, a guarded and somewhat closed community. In time we were invited to visit to his family. With them, we experienced first hand what life was like among those who still lived the traditional lifestyle that defines them as Yucatec Maya. We were included in everyday activities from processing chickens to be sold at the family’s polleria, chicken shop, to watching travelling bullfights held in an arena made of palapa sticks and palm leaves all tied together with rope, visiting with the local shaman or X’men in Maya, making tortillas by hand, cooking them over the fire and swinging the evening hours away in hand woven hammocks; shared rooms and conversation.

Sopa de pollo, Soup with chicken livers, mid morning at José’s family’s restaurantito, in the heart of the Yucatan Peninsula. 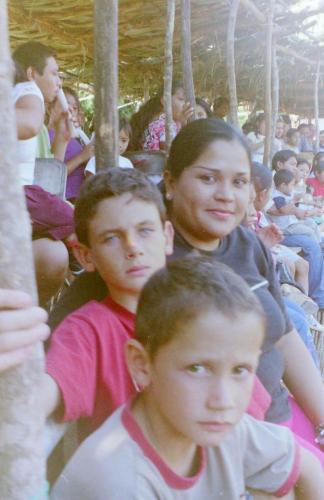 La corrida de los Toros, the running of the bulls, in Jose’s home town in Yucatan

Over time this young couple took us under their wings and into their hearts. Constant companions to me and my three young sons, they showed us the ropes of Mexican and Maya culture.

That first year, as the end of October drew near, while foreigners began planning Halloween parties, we could see there was something much more going on in the village. Annel and José were away from their families, and so when they told us about Día de los Muertos, or what the Maya call Hanal Pixán, I invited them to celebrate it with us.

We marched around town searching for an array of materials, necessary for the altar we had constructed in the house. These included a white mantel cloth to cover the table, candles, both white and coloured to be used on different days, a simple homemade wooden cross (here among the local Maya it was customary to place a tiny white and embroidered huipil onto the cross), photographs of some of our antepasados, ancestors, as well as other more recently departed relatives, armfuls of yellow and orange marigolds and smaller native purple flowers. We also bought some small toys for the spirits of the children and I added a tiny cloisonne vase, the one precious item that survived WW2 and Chinese internment with my grandparents.

From one of the town’s Maya families, we placed an advance order for handmade Muchilpollo. Made especially for this occasion, it was a great, round Tamal with Chicken and K’ol ( a smooth sauce of tomatoes and maise flour) wrapped in maise flour and banana leaves and baked over hot coals in a ground oven. A traditional Maya technique observed since pre-conquest times. There were caramelized calabazas, squashes and other starchy vegetables, and crunchy sweet jicamas sliced and dusted with salt, tamarind and chilli powder. We also chased spicy and aromatic bread, flavoured with lime, orange water, allspice and heavily dusted with coarse sugar, famously called Pan de Muertos. 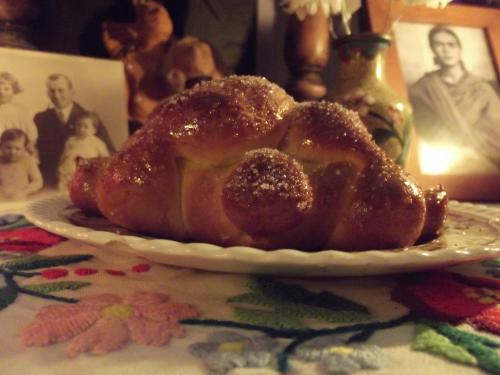 Pan de Muertos. Delicate aromas of lime, orange water and allspice are an invitation to the antepasados, ancestors, to feed upon the flavours although they cannot eat. The bumps on top represent tears and bones.

I was so enchanted by this experience and those we shared it with that I promised my compadres that no matter where in the world we were, we would remember and celebrate this time of the year. Little could we have known at that time, how much life would change and where the future would lead us.

At almost the same time, the very next year a series of events lead to a complete deconstruction of our lives. Our personal and professional circumstances fell apart within weeks of the arrival of Hurricane Wilma. She pounded the coastline over our little town with all the ferocity of what only hours earlier had been a category 5 hurricane. The town was evacuated, many people simply fled inland to Yucatan or South to Chetumal, the state capital, José and Annel among them. They left us the keys to their home, a small concrete bunker just a few kilometres inland. Their generosity saved our lives.The storm stalled directly over us for many hours as we huddled together in a state of torpa waiting for it to end. Like a great freight train we could hear it running over us, taking whole chunks of the town away with it. We returned to the set of a disaster movie, and Día de Los Muertos disappeared into the days afterwards searching for clean water, shelter, power and food. It destroyed the town and the livelihoods of many of it’s inhabitants, including ours. It lead to our eventual return to Australia and what was for me, an involuntary displacement from a place that I had come to call my own.

My son standing in the wreckage of our beachfront home, in the aftermath of Hurricane Wilma

Since then during the last days of October and the first days of November, each year, I continued to observe Hanal Pixán with my sons who are now grown.

The altar is assembled, always including the basic elements that we placed on the original; the small wooden cross, photographs of those remembered, cempasuchil, yellow marigolds, an image of La Virgin de Guadalupe, votive candles both white and coloured, water, salt, and Pan de Muertos which I bake.

A feast for the senses, we offer flavours, aromas, images and memories to the spirits of those who visit us in our hearts and memories

Each year the altar evolves with a life of it’s own. New elements are added. A small clay figure I have sculpted, reminiscent of thousands used as prehispanic offerings and buried in the ground, a calabaza bowl rescued from a junk shop, handmade paper flowers and papel picado, miniature Mariachi figurines, exquisitely woven and  embroidered textiles collected over the years from Mexico and the beautiful golden Coreopsis daisies that spontaneously bloom here.

Fragments of memories are represented by the elements on the altar. Textiles from Chiapas, gold from Yucatan mixed with pottery from my own hand

During Day of the Dead, we feast together and remember. On each of those magical, aromatic, candlelit nights a conduit opens between the past and the present, our old lives and the new. We celebrate and we reconcile the separation between the two worlds we have lived in. As surely as the spirits of the antepasados visit those who remember them in Mexico, in Australia, we visit those we remember, those we left behind too. We feed them, we sing and dance with our memories, we honour our people and our connection with Mexico.

“Esto fue la Rosa Maria de la vida anterior..” This was the Rosemary of the life before…

Rosemary Binks-Carvalho is an Australian artist, writer and mother. Her work reflects her passion for her other home in Mexico.