I first came across Matt’s blog when he posted the first installment of his 7 part blog 101 Observations of a Mexican Mega City. I really enjoyed seeing Mexico City through the eyes of someone who had recently arrived, and his observations made me laugh out loud more than once. A lot of things that I now sometimes don’t even think about were mentioned and it reminded me to look again through new eyes. Reading Matt’s blog, I was also intrigued by his own story of how he came to Mexico, and I am delighted that he is able to share his inspiring journey with you here… 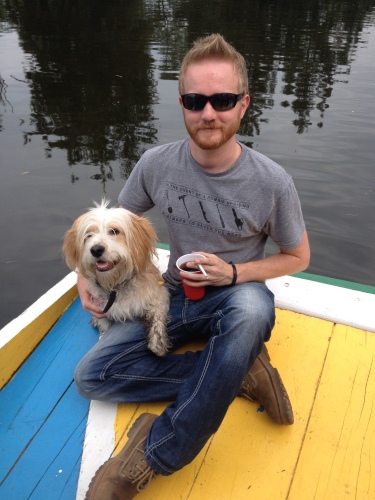 Rescuing a friendly dog from the murky waters of Xochimilco

“Why is that guy honking his horn?” I thought, as I drifted out of my daydream. The shimmer of a green traffic light pierced the darkness through my rain-obscured windscreen, prompting me to snap back to reality. The automobile behind me was clearly determined to continue its morning journey to work; an action that was becoming increasingly difficult for me every day.

So, why was I daydreaming? Well, England can be a relentlessly depressing place for a rat-race participant during the autumn and winter months. You wake up in the dark, you walk to your car in the rain, you embark on a frustrating drive, plodding through traffic towards your dull, grey-scale office, then you sit at your desk in an air-conditioned, brightly lit room while you satisfy your caffeine addiction and stare at a computer screen all day. There is some solace in the fact that the sun warms your face through the window, but that fades once you realize that it’s taunting you, promptly retreating behind the clouds at home time. This daily routine of mine was slowly chipping away at my soul, so I decided to do something about it.

I had always possessed a curious interest in the noble profession of teaching English as a foreign language, so I reached out to a friend to pick her brains. Amy gained her teaching experience in South Korea, and she had recently made the jump to Mexico to be a little closer to paradise. Once she explained what I needed to know, I enrolled in a 120 hour TEFL course, and after a slew of emails and Skype chats, Amy and I began connecting on a deeper level. Eventually, I boldly suggested that I move to Mexico and we try our luck as a couple. She immediately said “I’m all in”, and so my ticket out of the humdrum, predictable life had been bought.

To properly begin this new life, I would have to make some significant changes to my old one. One of the first things I did was sell all of my worldly possessions. The aim was to reduce my belongings to a small stack of boxes and a suitcase. It took some doing, but once that cumbersome electric drum kit was gone, the price of the car was negotiated, and my collection of vintage Nintendo games was in safe hands, I felt much lighter. I then donated a huge pile of clothes to charity and I trashed everything else. The whole process made me realize the extent to which our possessions own us, not the other way around. It’s only after you let these objects go that you realize you never needed them in the first place. I haven’t bought any unnecessary items since the day I arrived in Mexico. I don’t think I ever will.

Next up, the TEFL course. Now, this may seem a little irresponsible of me, but I never finished my course. I mean, I went to the 20 hour lesson, and I completed 4 of the 9 online assignments, but once I hit Mexican soil, I realized that I didn’t actually need it. Within my first ten days in the country, I was given the opportunity to adopt a few lessons from a teacher who was returning to Canada. After a short introduction, the agencies who hired me simply said “Well, if you’re doing the TEFL course, I guess you know what you’re doing”. Although I was responsible for training people in the past, this was my first attempt at actual teaching, but I was determined to jump into it headfirst. After a few weeks, my students were commenting about how they enjoyed my lessons, and my employees stressed how happy they were with quality of my work. It was then that I experienced yet another opportunity in this land of unlimited prospects. 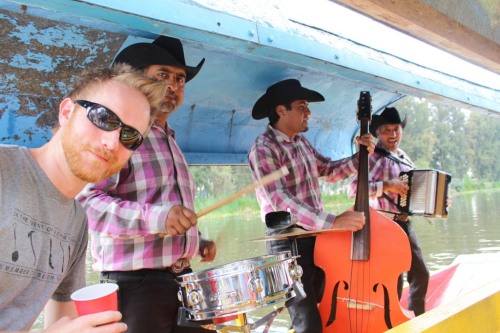 Whilst enjoying a tasty Mexican breakfast of Chilaquiles and Corona, I met a fellow British resident who explained that the publishing company she worked for was looking to hire new people, particularly some native English speakers. Even with no background in the field, and with no formal qualifications to speak of, I decided to apply for the position of Editor. The Senior Editor asked me to submit an original article which summarized the condition of Mexico’s automotive industry. A week later, I was offered the job. Today, I am responsible for editing many people’s work, writing my own articles, and transcribing interviews. Soon, I will also be interviewing political figures and CEOs of major industrial corporations. A few weeks ago, I was having lunch and schmoozing with the Canadian trade commissioner who invited me to swing by the embassy someday. I’m yet to take him up on the offer.

Perched atop the Pyramid of the Sun in Teotihuacan

So, that’s my story. It’s safe to assume that moving to Mexico has changed my life considerably.

Mexico City initially seemed like a daunting, terrifying place, rife with possible dangers and risks. Part of that impression has been instilled in my thoughts through the country’s ceaseless misrepresentation by the media and the narrow minded opinions of others. Just some of the things I heard back home were “Why would you go to Mexico?”, “What could you possibly do there?”, “Isn’t there nothing in Mexico but drugs and violence?” Now that I’m into my sixth month in the country, I feel qualified to answer those questions.

I would recommend that anyone who is unhappy with their current situation should take a risk and fly over here. The country’s people are deeply friendly and caring, the food is cheap, it’s readily available, and it tastes incredible, plus, the cost of living is around a quarter of the price compared to Europe. With regards to Mexico City, it’s just a few hours by car or plane from paradise on earth, namely, Acapulco, Mahahual, and Tulum; actual paradise. It’s also in a perpetual state of springtime, and the amount of opportunity for ambitious individuals, entrepreneurs, and companies looking to expand, is exponential. While drug related violence does occur, it is mainly limited to some of the Northern states, and rarely does it involve any tourists. 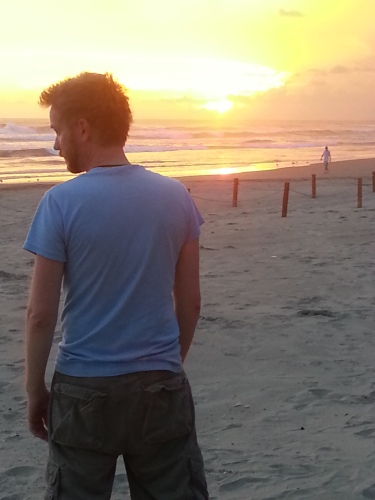 Watching the Pacific sunset in Acapulco

Once I overcame the trepidation I felt about moving to a country I had never been, once I abandoned all of my material possessions, once I finally landed on Mexican soil, and once I began seizing the opportunities that were handed to me, I was rewarded with knowledge, insight, and experience that I could never have acquired in England. Mexico has quickly become a place I am proud to call my home, and I can’t wait to see what challenges and adventures it offers up next.

Matt Kendall is a writer and editor for Mexico Business Publishing, as well as a freelance contributor on various websites. His blog, New Life Blind, documents his transition from the rainy climes of Bournemouth, England, to the sprawling urban environment of Mexico City. Having never been to Mexico before the move, Matt now happily calls Distrito Federal his home, and is eagerly looking forward to seeing more of what Mexico has to offer