José Santos got in touch with me when he arrived back in Mexico after many years living in the UK. He had come across my work through a collaboration I undertook earlier this year with the Mexican Cultural Centre in England of which he is a board member. Meeting José was a delight because he is like the reverse of me, a Mexican who spent many years living in the UK. It was fascinating to talk to him about his experience living in my homeland and to hear about how he had found the transition back to Mexico. In many ways, as I have become culturally Mexican, he has become culturally British, which was fun to see. I absolutely love José’s work in which I personally can see influences from both British printmaking and Mexican graphic art. Now for the interview so you can hear more about José in his own words, I hope you will enjoy it as much as I did….

Welcome back to Mexico. Where have you been living and for how long?
I have been living, studying in London and Worcester, England, for 18 years

What did you miss most about Mexico while you were living abroad?
To be honest I never really missed something in particular, but I would say the weather, and more recently the food, especially the spicy stuff like ‘chiles rellenos ‘ and ‘tamales de rajas’, I can eat that any day any time! Oh, and the variety of fresh fruit, it’s just amazing.

When you arrived back in Mexico what were the first things you noticed. Have things changed/stayed the same?
I arrived  at the end of September. The first thing I noticed was how ‘music mad’ Mexico can be…anywhere you are there is always music in the background, sometimes very loud as well and very very late at night…cheers me up!

What has been the thing you have loved most about being back?
It’s got to be the weather, the sunny weather has made a big difference not only for my emotional mood but the days seems to be longer and productive for the same reason.

What has been hard to adjust to?
Something that has frustrated me already is the lack time keeping and professional etiquette towards making a business appointment, it’s awful, from all levels of society, it seem like time is not important here. They can cancel an appointment 10 minutes before the arrangement,  or worse, they sometimes don’t show up at all. It doesn’t happen ALL the time but this is the most frustrating fact.

You are an artist. Can you tell me a little about the kind of art that you do?
I consider my work a series of marks. Consciously or unconsciously this mark making will awaken the viewer to interact with the piece. A fleeting thought ignites the creative process. Producing new work is an internal creative instinct at the time of making the image. The thought processes over many years and the stored images in the mind are sifted through before drawing the first line is even considered.

Viewing footage of Picasso in Vallauris France from 1949 when he is drawing on glass in front of a video camera it appeared that the drawings were seemingly effortless. Then came the realisation for me that it is not as effortless as it looks.

Inspiration for me is drawn from The ‘Arte Povera’ movement; one of the most potent post-war provocations to traditional practice and German artist Joseph Beuys.

More importantly, however, I have an admiration for nature and a commitment to social responsibility that drives my art practice on. 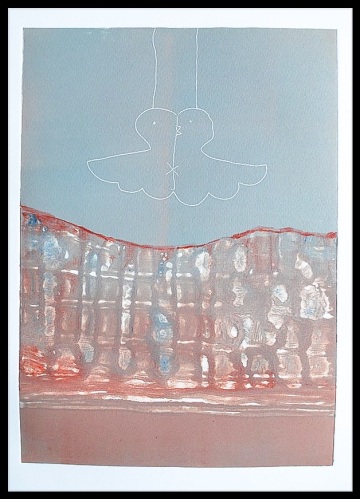 Do you have any projects or exhibitions that you are working on now?
I have four main projects going on at the moment:

1- Working at Lucio Santiago’s studio “La Huella Grafica” producing new etchings, lithography and experimenting with other fine art printing techniques.
2- Organising and working on new designs with a group of artists and artisans from Ocotlan, Oaxaca. This particular town has some of the most amazing artistic talents like textiles, black-smithery, leather crafting, wood carving, clay, etc. I’m very privileged to be part of this project.
3- End of January 2015 I have a solo exhibition ‘Perros de azotea’ at the “Museo del Palacio” ( Palacio de Gobierno-Oaxaca ). Exact date to be confirmed.
4- In talks with possible art exhibition next March in London, showing some of the best printmakers from Mexico.

Do you have any Oaxacan or Mexican artists whose work you particularly admire?
Wow, too many perhaps, from Zapotec, Aztec, Mayan symbolism, also first memory of inspiration as a child was Rufino Tamayo and later on I been inspired by Gabriel Orozco.

Jose Santos
-Mexican British Fine Artist. B A (Hons) Fine Art, England.
-Part of the Board of consultants for the Mexican Cultural Centre Nottingham.
-3 solo exhibitions in the UK, 8 group exhibitions.
-My work has been shown in presence of Her Majesty the Queen back in 2012.
-I gave talks and workshops about print making and history of design in prestigious museums like The Museum of Royal Worcester,The George Marshal and Medical Museum and The Tudor House Worcester.
-Active collaborator of the national yearly event ‘The Big Draw’ (England)
-My work has seen in books and promotional products for Selfridges and Bazaar Magazine.

You can find out more about José on his website or his facebook page and a further selection of his stunning prints can be found here.