Playa Play- What Mexican Beaches Taught Me About Life

“Aguas!” Watch out! was all I heard before I turned and ducked, narrowly avoiding being thwacked on the head by a huge inflatable whale. Emerging from the water, I heard the loud laughs of the Mexican family who had sent the orca flying in my direction. I couldn’t help but break into laughter too. After all it isn’t everyday that you nearly get knocked out by a large inflatable mammal whilst taking a cooling dip in the sea. I picked up the whale and pelted it back to the family, aiming it high to avoid further collisions. Suddenly I realised I was in a game of ‘chuck the whale’ as I watched it come flying back towards me.

Pulling myself away from the game ten minutes later, I wandered out of the sea and looked around at the small bay. The shore was filled with people laughing, playing bat and ball, frisbee, football. Kids were building sandcastles, grandparents were happily being buried in the sand by their grandchildren or sitting in the wake of the waves being rocked back and forwards. Families were enjoying the shade of palm trees, drinking beers and soft drinks, whilst music played out of speakers and the sound of the brass band at the neighbouring bay drifted over and a traveling guitarist played snippets of Mexican love songs enticing people to hire him to play them a song or two.

All of this, I realised, was in stark contrast to the beach I had been at the day before. For some reason that I cannot fathom, in Puerto Escondido some bays attract more foreigners and others attract more Mexicans. What I realised in that moment looking out onto the beach was that at the more ‘foreign’ beach, people enjoy the sea and sand quietly, reading books, sunbathing, posing in rather revealing bikinis or swimming shorts. There is no music and laughter does not drift as openly on the salty sea breeze. The vibe at the ‘foreign’ beach was altogether quieter, more considered and perhaps even a little self-conscious. I like that other beach, it is beautiful. I have even claimed it to be my favourite beach in the world. But now I was not so sure. Given a choice now, I would pick the ‘Mexican’ beach any day. 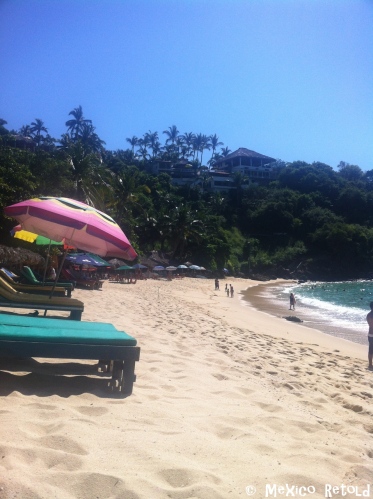 These differences say something to me about Mexico in general. There is a playful spirit about Mexicans that doesn’t seem to disappear with age. Kids are allowed to be kids and adults are expected to join in the fun. Life is about living and enjoying, laughing and sharing. Make noise, laugh out loud, get covered in sand and sea water. Don’t take life to seriously, seems to be the attitude.

So I urge you to follow the Mexican lead. Go and splash in the waves, build a sandcastle (yes adults too) and go throw an inflatable whale at some uptight English girl’s head. It might be just the wake up call she needs to remember the important things in life.