San Juan Chamula, a small village just outside of San Cristobal de las Casas, Chiapas, is an anthropologist’s dream. When I first visited about 8 years ago the streets were mainly dirt tracks and there were a few women selling their wares. Returning again last December, I noticed a stark difference. The main street is paved with shops and market stalls lining either side and there are tour buses arriving every hour. 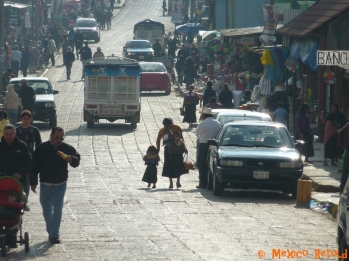 Chamula is famous for its church and the locals’ rather unorthodox use of it. Having paid our 15 peso entrance fee (this gives you an idea of the tourist spectacle that the church is) and having been told that taking photos was strictly forbidden (some say out of respect for people’s worship, others say the locals believe photos snap away their soul), we entered from the crisp bright day into the dark candle-lit church. One of the first things you notice, once your eyes adjust to the light, is that there are no pews in the church. Instead the ground is covered in green pine needles and the ceiling has great swaths of cloth hung from side to side. The edge of the main area of the church is lined with statues of saints whose images are rather different to that you would see in most Catholic churches. These saints are adorned with unusual ornaments like pineapples and flowers and their clothes were often covered in mirrors, which are believed by Chamulans to deflect the evil sprits.

We were forbidden from taking photographs in the church but here is an image I found taken by another visitor: http://adambeyondborders.blogspot.mx/ The church is lit only by candles and worshipers sit on the floor setting up lines of candles around them or in front of them. I watched a man painstakingly line up around 200 small candles on the floor, sticking each one to the surface with a tiny drop of molten wax. His focus never wavered. His meditative state indicating that this act played a role in his ritual worship. He, unlike most of the other worshippers we saw was alone. The others came in groups or pairs and sat together in ritual practice. It is important to explain the church at San Juan Chamula, is an interesting example of the syncretism often found in Mexico of Mesoamerican belief and ritual mixed with Catholicism. It is something that I find fascinating and have written about before. In many cases it goes unquestioned and beliefs can become a standardized form of Mexican Catholicism, however in the case of Chamula, the church has been rather less accepting and according to reports (although I could find no official evidence) it has been excommunicated from the Catholic church. The locals are known to be rather vehement about their beliefs and the community is very small, therefore, anyone converting to Protestantism is extradited from the community and made to leave the town. 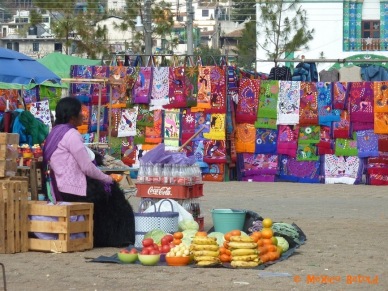 The market in the plaza outside of the church

Our eyes fully adjusted to the candlelight, we ventured further into the church and were immediately drawn to the site of two women and a young boy sitting surrounded by candles, glass bottles of coca-cola and a live white chicken. We watched as a few moments later one of the women began passing a live chicken over another lady’s body. The chicken didn’t make a sound or move an inch. The woman holding the chicken chanted in low, base tones, whilst the woman being cleansed sat with her eyes closed. This went on for quite a while and still the bird did not move or struggle. Engrossed in the ritual, we didn’t see a man dressed in the traditional black woolen tunic of Chamula, walk up beside us. We became aware of his presence when he whispered that he was a shaman and could perform a limpia (traditional cleanse) for us. A slight smell of alcohol tinged his breath and I couldn’t help feel that he could have been anybody, his traditional dress and his presence in the church perhaps used to fool tourists into believing he was a shaman. We politely declined and turned back to watch the ritual taking place before us. However, the ritual was now over and the chicken was being shaken upside down violently until it gave up the fight for life and went limp. The lady stuffed the chicken into a bag along with the pine needles it had been sitting on and tied a knot in the bag. The two women slowly gathered their things and made their way out of the church with the little boy in tow. The front of the church drew us in next, with its abundance of flowers and fruit, creating a colourful centerpiece. It was clear that the flowers are replenished regularly and that great loving care goes into the upkeep of the church. As we admired the flowers, engulfed in their fragrance, I heard the sound of a man spitting, and by spitting I mean really going for it, clearing those lungs. We looked around to see a man cleansing a woman with herbs and spitting on the ground beside him at frequent intervals. The idea is that the man, being a shaman, can extract the bad spirits or illness from his patient through his body and then spit it out on to the ground. It wasn’t particularly nice to watch but the patient was looking pleased with the process.

It is not just spitting that Chamulan’s believe rid one of evil spirits but also burping. What I didn’t mention is that every ritual that we saw at the church involved Coca-Cola. Every group involved in ritual practice had glass bottles of Coke with them. Generally we saw people drink it in shot glasses, almost as if they were taking a medicine. Coca-Cola was introduced to Chamula in 1962 and the Coca-Cola dealer is said to be the richest man in town. It is also rumoured that Coca Cola and Pepsi wars continue in the village, with each company fighting for the strong hold claiming that their product is better for the removal of bad spirits. If it is true, then Coca Cola’s current domination was clear upon entering the town where we saw that they had made a special Christmas billboard advertisement, just for Chamula, depicting a man in local dress holding a bottle of Coke!

Leaving the church we made our way out of the town via the graveyard. Here the colour of the cross gives you an idea of the age of the deceased. Black is for someone elderly, white is for children and blue is for any age in between. The graveyard is beautiful in its rugged irregularity and the church on the site, stands elegantly, its roof being the sky. Whilst we were there we happened to witness the funeral of an important man in the village. He had died some days earlier but because of Christmas his funeral had been delayed. A brass band played and fireworks were let off across the village and eulogies were given in the Tzotzil Mayan language by the village leaders dressed in their black tunics. 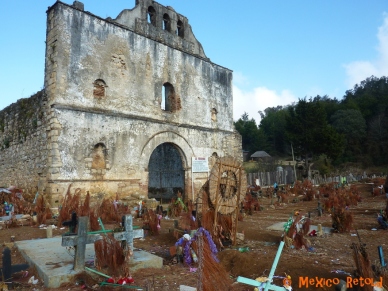 As we left the town we saw three men stripping off their black tunics and traditional hats, jumping into a Honda and driving away. I guess that’s the modern-day reality of San Juan Chamula. 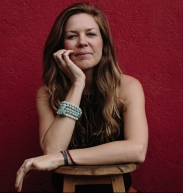